The coal industry and the railroads drove the development of Dennison being conveniently located at the midpoint between Pittsburgh and Columbus — 100 miles (160 km) from each. At the time, locomotives needed water every 100 miles (160 km), so Dennison was a natural refilling location. The Dennison Coal Company had mines south of town.

In 1864, The Pittsburgh, Cincinnati & St. Louis Railway decided to locate the country’s largest railroad shops and yards in Dennison. Dennison Land Company laid out the town of Dennison in 1865 and purchased land expressly for the town. The railyards spanned 40 acres (160,000 m2). In 1873, the village was incorporated and named for Governor William Dennison, and demand for passenger service led to the construction of a depot.. Thousands moved to the area for jobs in the roundhouses, turntables and foundries. At its peak, 3,000 people worked in the railyards. The Pennsylvania Railroad Company eventually incorporated the Pittsburgh, Cincinnati & St. Louis Railway.

Dennison, Ohio became one of the most complete railroad shops and yards in the country at the turn of the 20th Century, boasting 40 acres of railroad shops, 21 passenger trains a day, 21 freight trains a day and 3,000 railroad employees. Dennison was on the most direct route from New York City to St. Louis. The Village became a freight and passenger terminal and the headquarters for the Panhandle Division of the Pennsylvania Railroad, which was later consumed by Conrail.

In 1922, a strike marked the end of the golden era of Dennison.

Dennison is best known as the home of the Dennison Depot Salvation Army Servicemen’s Canteen during World War II. The canteen, which operated from 1942 through 1946, served refreshments to troop trains passing through Dennison.  The canteen ultimately served 1.3 million soldiers.  Soldiers nicknamed Dennison “Dreamsville, U.S.A.”, a reference to an ideal small town in a Glenn Miller song.

The last passenger train service stopped in 1968.  The Ohio Central Railroad Systems revived the freight line in 1992.  Currently the Genesee and Wyoming Railroad operate the line. 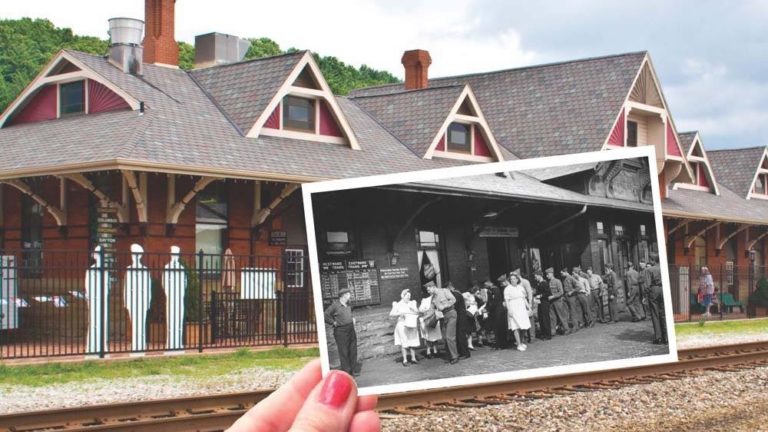 The Dennison Depot, built in 1873, stands as a proud symbol of Dennison’s vast railroad heritage. Purchased by the Village of Dennison from Conrail in 1984, the Depot was originally restored by a strong grassroots volunteer group and local vocational school students. It reopened in 1989 in memory of the many railroad employees, servicemen and women, and travelers who passed through its doors. The Dennison Depot was designated as a National Historic Landmark on September 6, 1978.

From 1992 to 2007, the Depot has undergone four additional phases of restoration. Preservation efforts focused on brick, sandstone, chimneys and water drainage. All architectural elements – brackets, eaves, sunbursts, dormer and stained glass windows were restored and rebuilt. Original signs were reproduced and rehung. And much needed amenities such as restrooms, office space, handicap ramps and a beautiful Victorian era safety fence added to the platform.

Railroad was king and every troop train was greeted with a smile and free cup of coffee. That hospitality and free coffee still exist today when you visit our beautifully restored 1873 Pennsylvania Railroad Depot that houses a museum, restaurant, and gift shop.

At our Museum, and in the new Children’s Wing, you will never run out of family fun! Climb in a caboose. Use your binoculars to watch the trains in the model train room. Sleep in a Pullman Bunk. Send a telegraph message to the Railroad Tower. Pack your hobo satchel. Explore the engine house, ticket office and watchman’s shanty while you go on Bing’s Scavenger Hunt (our famous WWI dog!). Explore the fun!

The Depot Museum features railroad and railroad related exhibits, along with a variety of events, throughout the year, for all ages. The Fall Foliage and “Polar Express” annually provided visitors and residents the opportunity to “ride the rails”, and even meet Santa Claus after visiting the North Pole each December. 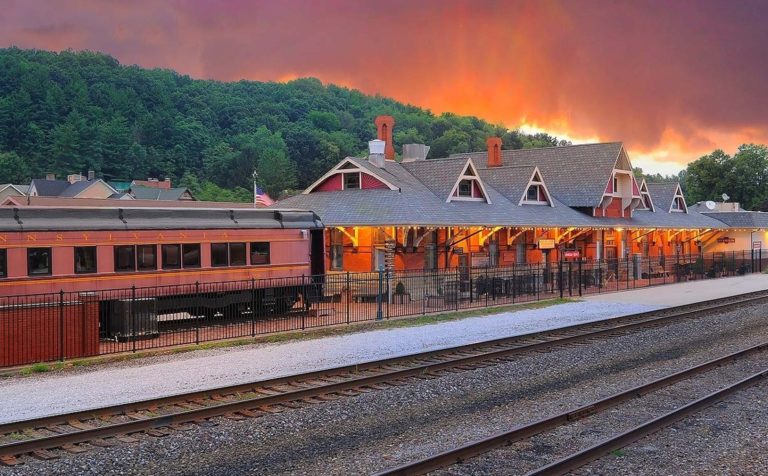 From its founding in 1865, Dennison was a railroad town and became the second largest rail center for the Pennsylvania Railroad. Rail presence was so strong that the industry dictated social and economic development throughout the community. For example, the Railway Chapel, the historic name for the First Presbyterian Church of Dennison was built because W.W. Card, Pennsylvania Railroad Superintendent, saw a spiritual need in the community. As the first church built in Dennison, Card contacted the Presbytery of Steubenville to start the church, arranged for donation of land, provided for financing from railway officials, and arranged for labor and material from the railroad. Railroad workers constructed the furnishings for the church with walnut pews built by the Dennison Car Shops. The pews have reversible backs, designed after ones in passenger cars. The church was dedicated in April 1871 and listed on the National Register of Historical Places in 2009.

The Presbyterian Manse, the dwelling for the Railway Chapel’s minister and family, was built at a cost of $5,000 in 1872, a year after the Chapel was completed. The ornate three-story, French Second Empire style brick home was situated on the east side of the Railway Chapel. Unique features include window hoods and sills carved from sandstone, with the entrance incorporating a transom and sidelights. The cornice contains ornate scrolled brackets between frieze panels. The mansard roof is enhanced with prominent segmental-arched dormers. Many delicate features inside the home befit the architectural significance of the house. The house is listed on the National Register of Historic Places.